Cally’s Caves 3 is coming to PC, with full controller support!  We’ve just launched a Steam Greenlight campaign and we could really use your vote.  The desciption for the PC version is below.

It’s time for the epic battle to save your parents!

Cally’s parents have been abducted, as her arch-enemy Herbert has taken control of the Caves to perform his evil experiments. Join Cally and her friends in this action-packed run and gun platformer, conquering insane bosses, exploring to find secrets, and levelling up EVERYTHING.
Use your weapons to level them up and evolve them into their ultimate forms! Unlock new character abilities like the Triple Jump, Dodge Roll and Water Wings. Use a second playable character, Bera to unleash crazy awesome ninja moves and solve challenging puzzles. Most importantly, battle to rescue your parents from Herbert’s clutches, and bring an end to Herbert’s experiments for good!

It’s time to battle for your parents freedom, to protect the Caves’ animals and natural resources, and most importantly, to SAVE YOUR PARENTS! 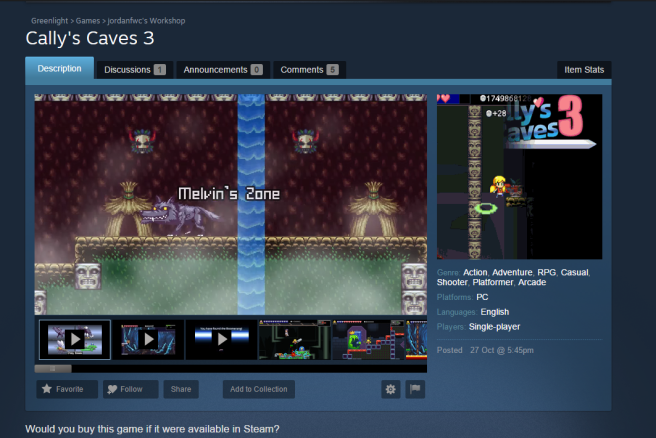 One thought on “Cally’s Caves 3 is on Steam Greenlight!”